A film adaptation of Earl Aleksander Fredro’s comedy from 1956. Two neighbours in dispute, Butler Raptusiewicz and Notary Milczek, are fighting about a border wall. They are not aware that their dependants, the Notary’s son Wacław and the Butler’s niece Klara, are in love. Wacław and Klara are looking for a way to tell the world about their love while at the same time the Notary and the Butler are plotting to destroy the other side of the border wall…

It is dawn. The people living in a huge castle look out of their windows and at each other: Wacław looks at Klara with love, the Butler looks at the Notary with hate. They are in dispute over a border wall. When one day the Butler sees bricklayers trying to clog a hole in the wall he asks Papkin to cast them out. Papkin is his servant, but most of all a liar and a bragger. He hides behind the bricklayers, he turns the Butler’s other servants against them, and once they have cast them away, he takes the credit.

The Butler’s financial situation is not perfect. In order to save himself he plans to marry the Lord High Steward’s widow. Papkin is supposed to be the matchmaker. He brags that if he looks at any woman once she will do what he likes. He pays a visit to the widow, but at the moment she isn’t impressed by him at all.

Antoni Bohdziewicz and Bohdan Korzeniewski, who united to film “Revenge”, made a clear task division. Korzeniewski, who had directed Fredro’s comedy in the National Theatre in 1953 (the spectacle was a huge success, it was played over 200 times), knew the drawbacks of the previous theatre adaptations of this piece, so he could make sure that the film would be free of them. Bohdziewicz was responsible for filling “Revenge” – a stage piece – with the soul of cinema, to increase its dynamics, to take it outside of the theatre. It is interesting that at the beginning they planned to film the spectacle in the theatre and then use editing to move outside of it. In the end they decided to make a film. – Our “Revenge” – said Bohdziewicz – is the first post-war attempt to film a classical dramatic piece. An attempt neither easy nor simple. Especially since we are moving away from the common adaptation. We are simply making a film. A “very talkative” film – that’s true – but a film! We treat the text of “Revenge” almost like a script written for us by Fredro. The additional difficulty is the necessity of keeping the poem in which “Revenge” is written, in its film version. The eight syllable piece by Fredro is so colourful, so lively, that we believe that this element of stylization will not prevent the viewer from seeing the realistic quality of the piece.

– This is certainly an experiment on our end – added Korzeniewski. – Bold, but not crazy. We decided to film “Revenge”, not an adaptation of a piece played in theatre (…). The amount of events in “Revenge” is large and these events have a logical order. Only the Butler’s love for the widow is shown.

The shortcuts were in essence small because both of the directors wanted to be loyal to the original. However in other matters which had to be resolved during filming they were not as agreeable. Korzeniewski was supposed to lead the actors, but he could not think outside of a  theatre convention, which is why Bohdziewicz took over this task. “As it usually is in such duets – Beata Tyszkiewicz wrote in her autobiography – the directors had some conflicts during filming. For example, Korzeniewski showed me how I was supposed to run down the stairs while Bohdziewicz laughed out loud and said: “I beg you, Beata, do it like him”.

For Tyszkiewicz this was a debut, she was only seventeen and had no film experience. Bohdziewicz’s assistant, Paweł Komorowski, saw her at the school on Klonowa and invited her for the audition for the role of Klara. The whole cast was shaped for a long time. A month before filming not all of the actors had been chosen. In the end Bohdziewicz and Korzeniewski left it to the big names: Kurnakowicz (the Butler), Woszczerowicz (the Notary Milczek), Fertner (Dyndalski), Kondrat (Papkin), Szaflarska (the widow). This choice, although it gave the film publicity, did not bring it closer to cinema which uses modern methods of expression. Woszczerowicz and Fertner were most of all theatre actors and had experience in pre-war cinema. That is why the style of Bohdziewicz’s and Korzeniewski’s “Revenge” was somewhere in between these two poles and was not close to anything which was then new in cinema. – This was an unfortunate film – Danuta Szaflarska once said. “Revenge” was indeed full of filming and human disasters. First (1st April 1955) Tadeusz Kondrat had an accident when he was returning from the set. For nine days doctors fought for his life, later it took him half a year of rehabilitation at Crimea to get better. However Kondrat never returned to his full strength and physical fitness. He came back to the film set, but technical miracles had to be done to film the scenes with Papkin. He was substituted by an understudy, but in the close-ups Kondrat had to be filmed using a special swivel chair. In the scene when Papkin was supposed to look to his side or his back, the chair was moved to the right side. Another accident happened at the end of the filming. When one of the scenes was filmed, Woszczerowicz pushed Fertner in such an unfortunate way that Fertner fell over the handrail. His broken ribs pushed into his lungs. The film crew did not realise that the situation was dangerous. Only after a few hours was Fertner taken to the hospital, where he died. The film lacks the famous scene of the dictation the letter “Mocium panie” by Dyndalski. Bohdziewicz and Korzeniewski didn’t film it on time. The film was on screen only in September 1957. The critics were not convinced by the film, but it was very popular among the public. In the 1957/58 cinema season it was number six in turnout.

I do not like theatre in film. I don’t like dialogues in speech tied on the canvas of the screen. I do not like films which had already gotten old during filming.

Most likely two or three years ago we would have looked differently at all of the strange elements added to Earl Aleksander Fredro’s piece by Antoni Bohdziewicz and Bohdan Korzeniewski. Maybe we would have applauded it then. Today it only irritates people. That is the result of a film getting old – it was begun in 1955 and appeared on screen in the last quarter of 1957.

It seems that nobody won on screen in “Revenge.” Neither did Fredro become filmic nor did Bohdziewicz show the wilder side of a great adaptation of a stage piece. They both lost a bit: the old Earl lost his melodrama, his stage genius, while our energetic director his filming which he wanted to give all of the older children in Poland who knew the story of the Butler and the Notary, the widow, Klara, Wacław and Papkin. The events which had been inevitably linked to the border wall dividing the castle into two parts in theatre. If we were to judge “Revenge” only by watching the film adaptation by Antoni Bohdziewicz and Bohdan Korzeniewski we would have to consider Aleksander Fredro a very non-filmic writer. However we remember “Revenge” from many spectacles and we wonder whether the director had really used all of the screen potential of this piece? (…)

The scene of the dispute about the border wall, which was suitable for a filmic dynamization – is dull and too theatrical for the screen. The same applies to the love intrigues, the conflicts Klara-Wacław-the widow. Idem – catching Wacław. Idem – Papkin’s visit to the Notary. These are examples of existing facts in the piece.

However the story told by Papkin of his adventures during his journey to the Butler’s castle is a magnificant story of a liar. It would require at least a film retrospection which would be in harmony with the Butler’s words – he laughs at Papkin’s lies – and showing the adventures of the bragger would bring a humorous dynamism. It would be – as intended by Fredro and the film requirements – a confrontation in which the director could let his imagination run loose.

The film “Revenge” directed by Antoni Bohdziewicz and Bohdan Korzeniewski is like wine. The older it is – and it is now half a century old – the better. It doesn’t matter that the colours have paled over the years and that the sound isn’t as clear. These minor bruises on the film technique are more than compensated with the way the great actors play, the wonderful roles of Jan Kurnakowicz, Jacek Woszczerowicz and Tadeusz Kondrat. The old charm is highlighted by Stefan Kisielewski’s great music, the conventional, but specific scenography by Roman Mann and the picturesque scenes by Stanisław Wohl. It is thanks to these artists that the first screening of Fredro’s “Revenge” still has the charm of an aquarelle. There is nothing left to do but look and take the words and the images in.

I was warned beforehand. However when the film began I was at first happily surprised. There were two equal, but combined action sets on screen: the Butler’s side and the Notary’s side in a common old castle. Before our eyes a borderline arises between them: it is the famous wall which will be the subject of revenge. Then the action starts, however not the one we know from theatre. It is dawning in the castle, girls and women are plucking hens, dogs are barking, cats walking around – in essence, everything which is part of the daily life of the characters and environment in Fredro’s “Revenge” starts. We will later return to such scenes many times during this short film. They will also be a part of the final scenes. I don’t believe that this was only meant to meet the needs of outdoor filming. I think that the authors of the script and the directors had a fine instinct in showing the peripheries of Fredro’s comedy and completing it with their own imagination of what could have been on stage and what couldn’t, based on the atmosphere of the piece. (…)

There are so many great themes – filmic themes I believe – which could be raised in an adaptation of Fredro’s “Revenge.” It would be in service not of popularizing the piece – it does not need this – but of refreshing our reactions. For example we do not know much about Klara from the comedy; she says many charming things often overlooked in theatre, overlooked maybe because we know so few details about her. I would therefore be happy to see film scenes showing Klara in her everyday life at the castle, like scenes in “Sir Thaddeus”. The authors of the script seemed to be going in this direction, they even showed Klara in a conversation, but then they stopped midway. (…) Instead, they filmed most of the scenes of the actual action in “Revenge”, therefore doubling the spectacle. It turned out that a film, with its richness of technical abilities, not only did not enrich the expression of these scenes, but it actually made them worse. 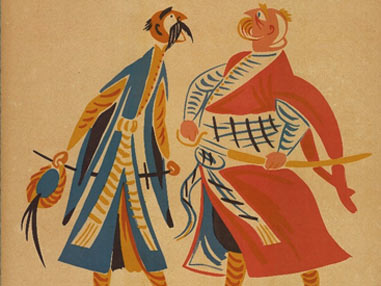 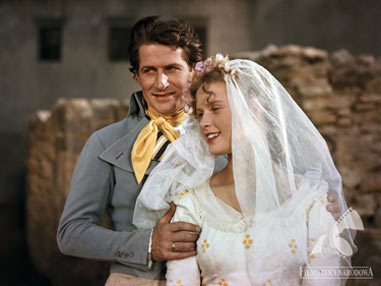 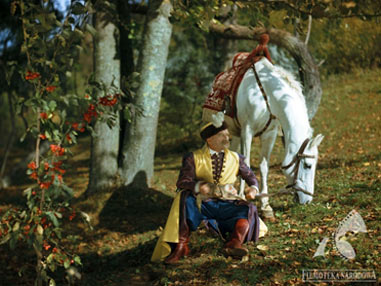 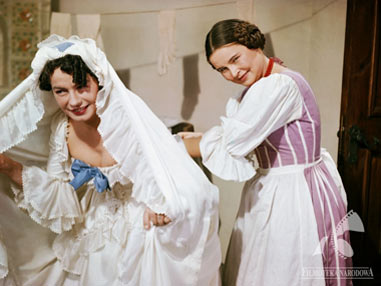 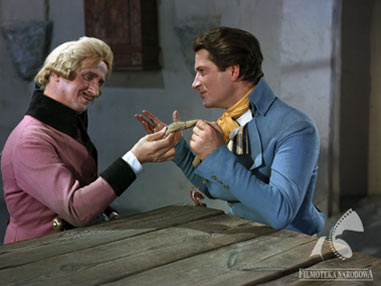 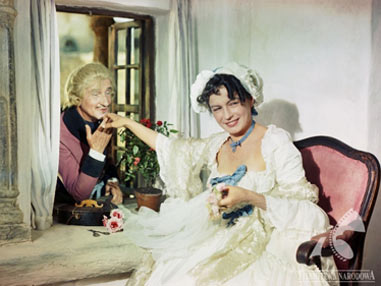 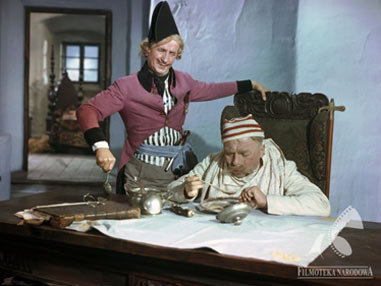 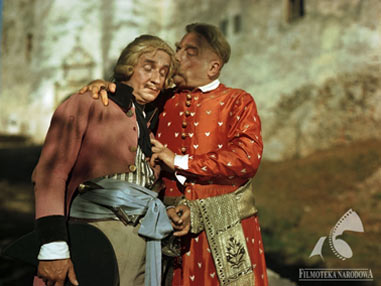 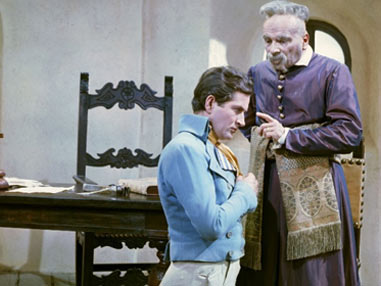